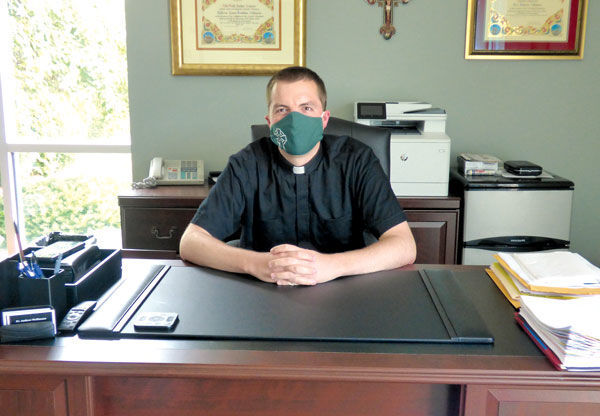 The Rev. Andrew Wellmann is pictured at his desk in St. Patrick Catholic Church. Wellmann took over parochial administrator duties at both St. Patrick in Bryan and Sacred Heart in Montpelier, since July 1. 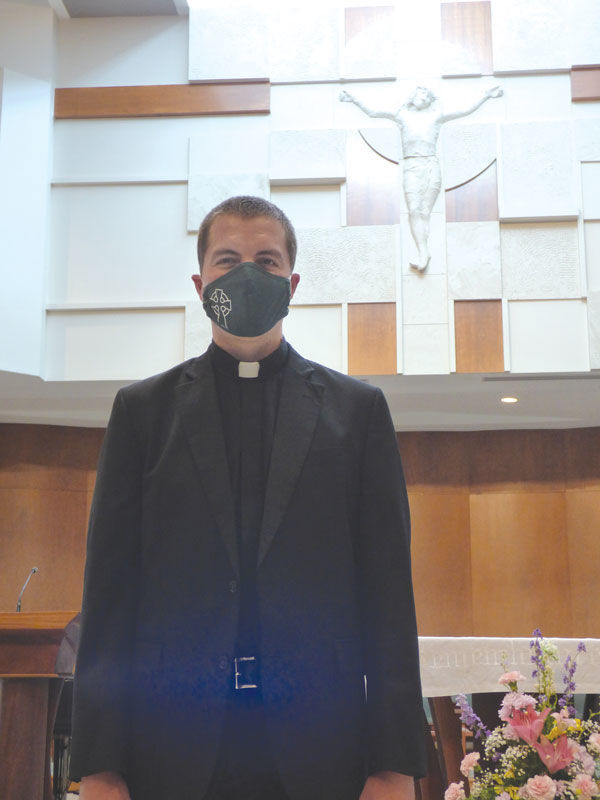 The Rev. Andrew Wellmann is pictured in the sanctuary at St. Patrick Catholic Church. Wellmann took over parochial administrator duties at both St. Patrick in Bryan and Sacred Heart in Montpelier, since July 1.

The Rev. Andrew Wellmann is pictured at his desk in St. Patrick Catholic Church. Wellmann took over parochial administrator duties at both St. Patrick in Bryan and Sacred Heart in Montpelier, since July 1.

The Rev. Andrew Wellmann is pictured in the sanctuary at St. Patrick Catholic Church. Wellmann took over parochial administrator duties at both St. Patrick in Bryan and Sacred Heart in Montpelier, since July 1.

Wellmann previously served a parish in Newark, Ohio, before Bishop Daniel Thomas assigned him to be the parochial administrator for both St. Patrick and Sacred Heart parishes in Bryan and Montpelier respectively.

Wellmann started in the position on July 1, taking over for the Rev. James Halleron, who left for medical reasons.

He originally hails from Delphos, where he was active in the church and went to St. John’s Catholic School from preschool through high school.

For one year, Wellmann was a general studies major at Ohio Northern University.

While there, he thought he should give the seminary a try.

“In life, you have to try and that’s what I did,” Wellmann said. “That’s part of what the sermon is about, is listening to the voice of God and discerning what it is He is asking of you and then having the courage to do it.”

He first attended the Pontifical College Josephinum, a seminary in Columbus, where he studied philosophy.

From there, he went to Saint Mary Seminary and Graduate School of Theology in Wickliffe, near Cleveland, where he studied theology.

He was ordained in 2018, doing an internship in Mansfield before spending two years at a parish in Newark.

Now, he has two parishes and a school.

Part of that responsibility this year will be handling the COVID-19 pandemic.

School officials and Wellmann are working on finalizing the pandemic response plan.

“That is something we’re going to release as soon as it’s ready,” Wellmann said. “We just have a few more things we’re finalizing. Of course, you know, it changes. Something like that is so fluid and so fluctuating. And that’s part of it. But, we’re making good progress.”

The church has resumed in-person services, though they are seating people every other row and are mandating the wearing of masks.

“We’re doing all we can to keep people safe, healthy and comfortable,” Wellmann said. “I’m pretty pleased with how we’ve done ... We just monitor the latest updates and act accordingly.”

Wellmann has been in Bryan and Montpelier for less than a month, but he has already helped with a reverse raffle, which he said went really well.

Overall, he likes the parishes.

“We have great people, we have talented people ... very bright stars, I like to call them,” Wellmann said. “I’m very grateful for people being patient with me, for showing me around, for showing me things because that’s a really big part. When you’re new somewhere, there’s a lot to learn. People have been very helpful, very kind to me.”

After only three weeks, it’s a little hard for him to say if there is anything in particular he’d like see done or changed at the parishes.

However, he said he was a “high energy” person.

“We’ll just see where that goes,” Wellmann said. “I do have some ideas, a lot of people have ideas. We’re just going to see what we can work together and accomplish.”

He also likes the Williams County community and is looking forward to checking out the parks.

“I love Sonic,” he said. “I get the blasts, the Sonic Blasts and the slush. Those are my favorite items.”

Outside of his duties as a priest, Wellmann enjoys watching the New York Yankees and The Ohio State University football.

He also enjoys concerts, reading and being out in nature and traveling. Wellmann’s parents are still in Delphos and his sister is in Chicago.

When it comes to saints, saints Andrew and James are big parts of his life, coming from his first and middle names.

Of course, he also had nothing but good things to say about St. Patrick.

“He’s great,” Wellmann said. “I really like St. Patrick. You know, St. Patrick is special because he did so much to evangelize the whole country of Ireland.”

His other parish’s patron is also special.

The Sacred Heart of Jesus, though not a saint, is still great as “you can’t do better than the heart of Christ,” he said.

On a personal level, Wellmann selected St. Nicholas as his personal role model for Confirmation.

“I also have to mention Pope St. John Paul II, who is, I would say, really my favorite saint of the modern era,” he said. “He’s had a big influence on me, I would say.”

Why ballot drop boxes are an easy alternative to USPS

What could happen to TikTok and WeChat after Trump ban

Do TikTok and WeChat pose real threats to national security?