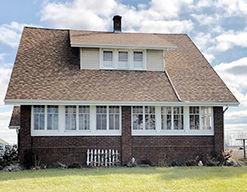 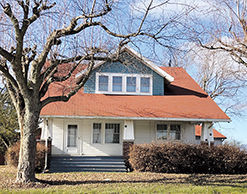 WEST UNITY — It’s that time of year and the town of West Unity is busy with many Christmas events for the whole family.

On Saturday, Dec. 7, the day begins with the West Unity Omnibus Club presenting its 31st Annual Christmas House Walk and Craft Show, “All Wrapped Up For Christmas!”

The Omnibus club is featuring four beautiful homes that are festively decorated for the Christmas season. For your viewing this year are the homes of Ernest and Shawn Knapp, Bill and Teresa Noethen, Lisa Wendorf and the Derek Meyers farm.

The cost to view all these homes is $6 and tickets can be purchased at the West Unity Kissell Building, located in the park, from 9 a.m. until 3 p.m. on day of event.

The Kissell Building is filled with many crafter booths. Shopping hours are 9 a.m. until 3 p.m. and lunch will be available from 9 a.m. to 3 p.m.

The village has planned many events throughout the day on Dec. 7. A wood carver will be located on Kringle Corner and Santa Claus will be at the West Unity library.

For more excitement, come to the Christmas Parade at 6 p.m. A very special tree lighting will take place at Friendship Park, located downtown, following the parade.

The West Unity Omnibus Club promotes many worthwhile community services in the community. The proceeds from the house walk and craft show are given back to the community in various projects.

Derek and Shay Meyers live on 2 acres of land just outside of West Unity on SR 127. Derek Meyers has owned this home for five years.

This home truly has a farmhouse feel. The woodwork is all original and even has a clothes shoot concealed in the bench seating area in the dining room.

As you pull up to the residence, make sure that you pay attention to the large snowman that will be displayed. It was purchased from the Zone School Auction and belongs to Dexter and Gloria Wyse. It was featured on Channel 11 News.

The dining room will have a beautiful nativity scene to symbolize the reason for the Christmas celebration. This has a special meaning as Shay recently spent 15 days in Israel.

There will also be a photo opportunity as Santa will be waiting to take your Christmas list.

The kitchen will have an aroma of cookies, as helpers will be baking Christmas goodies. As you head upstairs you will enter the dressing room of Marilyn Monroe.

Across the hall you will enter the primitive room where sleeping children will be snug in their bed.

The last room that you will visit is the Gold Star Room. On display will be pictures of soldiers that have been honored over the last 10 years. Their mothers each received an oil painting of their son and was presented during a Blue Star/Gold Star presentation.

During the time of Tobey’s ownership, this 2,024 square feet, three bedroom tri-level, was completely renovated. Much of the work on the home was completed by Tobey, Lisa and their children.

Lisa resides in the home with her teenage daughter, McKenna, along with stays by her adult son, Devin, and three grandsons.

The first bedroom, also used as a guest room, is decorated in memory of Lisa’s son Christian who passed away in March, 2018. The tree features homemade picture ornaments, angel wings and a few special ornaments in memory of Christian.

Heading downstairs is the family room, including bar, dual air hockey/pool table, and a playroom for the grandkids. On display is a small Nascar collection and Ohio State items. It features an Ohio State Buckeye tree. The playroom features a Grinch-themed Christmas tree.

The back yard features a newly poured 20x30-foot concrete patio, a memorial garden, a large play area with a swing set for the grandkids, and a fire pit area.

The back yard also contains a 20x15 utility shed, with a 12x15 overhang, where the family enjoys getting into the hot tub in the colder months. The utility shed itself was converted into a she-shed for Lisa’s daughter and her friends to hang out. The she-shed will feature a sunflower-themed Christmas tree, her daughter’s favorite flower.

Lisa would like to thank Tobey Wendorf and Roz Wendorf for allowing her to borrow many of the Christmas decorations displayed throughout the home.

The Allion homestead was built in 1927 and was purchased by Ernie and Shawn Knapp in August, 2018. It has the original hardwood floors and trim throughout the home. The walls are plastered, which is not common in homes built in the newer era.

The front porch entrance of the home showcases beautiful old windows that still open and is a relaxing place to sit.

The living room features an antique Christmas tree on display belonging to a friend, Kiley Nafziger.

The upstairs features a bathroom with a claw- foot tub and walk-out balcony.

The large old post-frame barn has been updated with a metal roof and will be undergoing foundation work in the near future. The roof also houses solar panels used to power the home and outbuildings on the property.

It didn’t take long to meet their neighbors. On the first day of ownership, the Noethens met all their neighbors due to an accident which occurred in the front of their home. Life Flight had to land in their front yard.

This Christmas season, Teresa would like to share two collections that are very special to her. The first one was started by her daughter Kylie’s first babysitter, Debby Dalton. She has a beautiful collection of snow villages all over her home. On that first Christmas, Teresa enjoyed them so much that when she received her Christmas money gift from her grandma Mary, she purchased her first snow village house. From then on she has continued her collection with the last piece, which Bill bought, a police department.

The second enjoyment Teresa has is her collection of different nativity scenes which she has collected over the years.

On the back porch you will see a wooden nativity scene which Teresa made.

In this home you will see an abundance of beautiful Christmas trees throughout the home. They include a woodland tree, snowman tree, Ohio State tree, gnomes tree, a black and white tree and an elf tree.

Crow: Trump legal team focused on everything but the facts