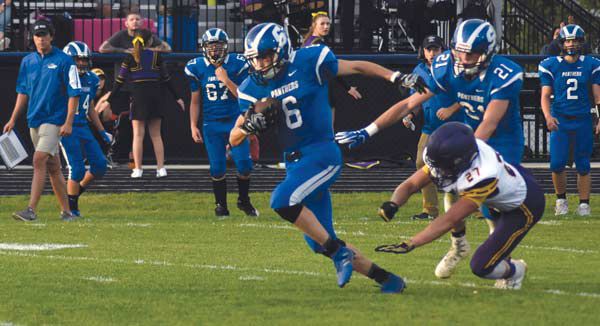 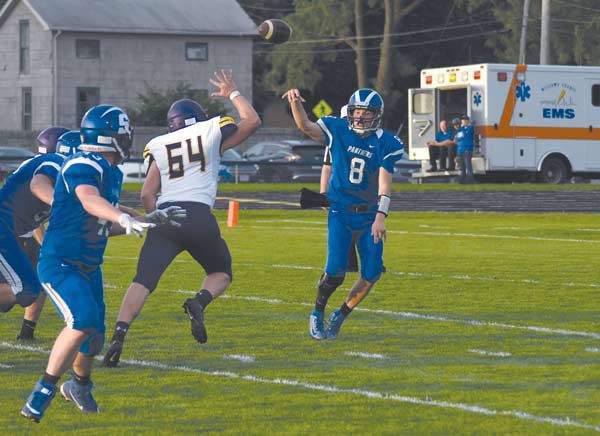 Stryker’s Payton Woolace tosses a pass during a football game against Holgate in Stryker on Friday. NWS Courtesy Photo

Stryker’s Payton Woolace tosses a pass during a football game against Holgate in Stryker on Friday. NWS Courtesy Photo

STRYKER — Holgate football coach Colton Wagner said before the game he didn’t know what to expect from the Tigers’ eight-man debut against Stryker Friday night. He was all smiles after his team’s 62-33 season-opening win.

“I’ll take that to start us off for sure,” Wagner said. “I thought the guys had great energy all game long, and even though we made some mistakes, I thought this was a great first step for us.”

Junior quarterback Gavyn Kupfersmith finished 2-of-3 passing for 74 yards and two touchdowns, with both completions going to tight end Blake Hattemer, while the Tigers’ ground game did the rest of the damage.

“Kup is a leader out there for us,” Wagner said. “He’s out there picking guys up and being vocal. He looked great the few times he threw the ball and he also made some big plays with his legs.”

Stryker quarterback Payton Woolace finished 9-of-31 passing for 228 yards and four touchdowns, while rushing for another. All but one of the junior’s touchdowns went to fellow junior Kaleb Holsopple, who pulled in four catches for 153 yards and three scores.

Wyatt Short added a 24-yard touchdown for the Panthers in the fourth quarter.

“Payton and Kaleb are buddies, so they have a good existing chemistry,” Stryker coach Kent Holsopple said. “With Payton coming back as our starter last year, it makes it easier for him to pick up where he left off, and the guys responded really well to him tonight.”

The Panthers took a quick 7-0 lead after Holgate muffed a first-quarter punt when Holsopple pulled in a catch over defensive back Hunter Gershultz and tumbled into the end zone for an acrobatic 22-yard score.

Holgate answered six plays later when Ethan Altman scored the first of his three touchdowns, this time from 28 yards out. Wagner said before the game Altman is primed for more carries in 2019.

“Ethan had some really awesome runs out there tonight,” Wagner said. “He was hitting holes and making guys miss left and right. That was huge for us to have another option in the rushing game, and he answered the call.”

Holsopple scored his second touchdown of the night one play later on a 76-yard strike from Woolace, and it appeared Stryker was ready to hang with the Tigers until Gerschultz returned the ensuing kick-off for a touchdown to put Holgate up 14-13.

After Holgate forced a Stryker punt on the next drive, Gerschultz broke off a 40-yard run to set up a four-yard Jeradt Nagel score. The Tigers forced another three-and-out before Kupfersmith hit Hattemer for his first score, from 44 yards out to take a 28-13 lead, and Holgate was off to the races.

Nagel broke off a 42-yard score on the first Holgate play of the second quarter, and Gerschultz picked off Woolace one-handed two plays later before Nagel found a 14-yard touchdown to push the lead to 42-13 with 9:37 left in the half.

Altman stretched the lead to 50-13 with 5:14 remaining in the second quarter with a 72 yard score before Holsopple scored his third of the half, from 17 yards away.

Hattemer tallied in the final minute from the 7 yard line to give Holgate a 56-19 lead.

Despite the deficit, coach Holsopple said he thought his team played well throughout.

“We got into a bit of a lull there in the second half of the first quarter and the second quarter, and I think we were passing the ball too much,” Holsopple said. “Other than that, I think we held up well against a physical Holgate team. We just let the clock stop too much in the first with some incompletions, and they took advantage.”

Neither team scored in the third before Woolace found Short to pull the Panthers to within 56-25 with 10:49 remaining in the game.

“I’m really proud of my guys for how they played in that second half,” Holsopple said. “We were down a lot after the first half, but they kept playing hard, and it really showed in the second.”