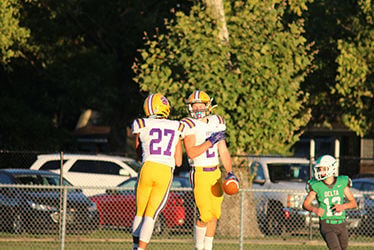 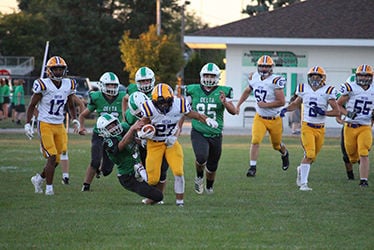 Bryan’s Korbin Shepherd (27) runs with the ball as Delta’s D.J. Davis (3) tries to tackle him during Friday’s game at Delta. 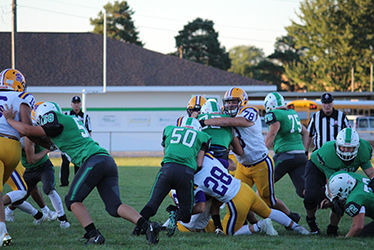 Bryan’s Korbin Shepherd (27) runs with the ball as Delta’s D.J. Davis (3) tries to tackle him during Friday’s game at Delta.

Bryan’s football team overcame numerous turnovers, penalties and mistakes with a stout defensive performance in knocking off Delta 14-3 in a Northwest Ohio Athletic League game on Friday at Delta.

“A win’s better than the alternative,” Bryan coach Grant Redhead said. “... We’ve got to get better at the simple things. These mistakes have happened for two weeks and I’m beside myself with how sloppy we’re playing.

“We won. We’ve got to fix them, but we need some help. We need our kids to come along and start buying in and doing the things that we need to do. We can’t keep making these mistakes against good football teams.”

Bryan picked off Delta quarterback James Ruple three times, including two in the fourth quarter to put the game away.

With Bryan leading 7-3 midway through the fourth quarter, junior defensive back Jaylin Damron intercepted Ruple’s pass and returned it 30 yards for a touchdown to give the Golden Bears a 14-3 advantage with seven minutes left.

Damron, who tallied all three interceptions, snatched his last one in the final seconds to seal the win.

“Bryan’s got a lot of guys, they got some players. We were outmatched all over the field, but our guys kept battling and we had our chances,” Delta coach Nate Ruple said. “We didn’t make plays tonight and hats off to Bryan, they did.”

Bryan held Delta junior running back Josh Tresnan-Reighard to 58 yards on 23 carries. The 6-foot-1, 200-pound back had 169 rushing yards against Evergreen a week ago.

Robinson gets the start at quarterback for an inconsistent MU offense

“They did a nice job of taking us out of our comfort zone,” Nate Ruple said. “If we’ve got to drop back and throw the ball 20 times a game, right now, we’re just not that team. They did a good job, hats off to that defensive line and those linebackers for making plays.”

Bryan tallied just 157 yards of offense, but a huge play in the second quarter gave the Golden Bears the lead. Bryan quarterback Ethan Wasson found senior Caleb Kepler for an 84-yard touchdown with 9:56 left to give the Golden Bears a 7-3 lead.

Kepler, a 5-8, 175-pound senior, outjumped two Delta defenders to come away with the ball and raced to the end zone for the score.

“It was almost a busted play and that was our lone score on offense,” Redhead said. “Yeah, we could have won 7-3, but we’ve got to get the ship righted on that side and it starts up front.

“We’re not very good there now, so we need to fix it. I love my kids and I’m never going to quit on them, but they’ve got to step up and we’ve got to get them doing what they need to do.”

Wasson completed 9 of 20 passes for 116 yards and threw an interception late in the first quarter. Junior running back Korbin Shepherd tallied 55 rushing yards on 13 carries for the Golden Bears, while Kepler led with three catches for 90 yards.

Delta turned Wasson’s interception into a field goal, and got some help from the Golden Bears. A pass interference penalty on Bryan on fourth-and-14 gave Delta a new set of downs, and four plays later, Austin Kohlhofer booted a 31-yard field goal.

“I’m proud of our guys,” Nate Ruple said. “They battled for four quarters. They’ve come a long way since last season and we’ve got a lot of work to do, we know that.”

The favorites of a "bubble" French Open