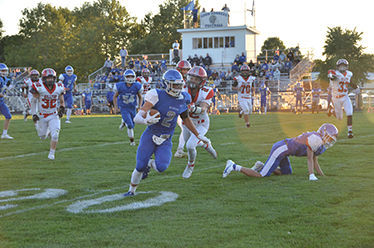 Edon wide receiver Destin McCartney (2) escapes a tackle from Hilltop defensive back Chase Whitman (2) in the Bombers’ game against the Cadets on Friday night at Leanne Field in Edon. 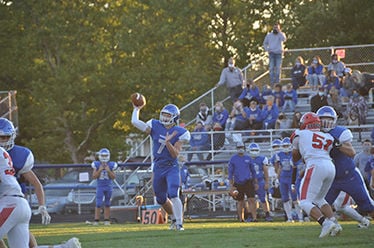 Edon quarterback Drew Gallehue throws the ball in the Bombers’ game against Hilltop on Friday night at Leanne Field in Edon.

Edon wide receiver Destin McCartney (2) escapes a tackle from Hilltop defensive back Chase Whitman (2) in the Bombers’ game against the Cadets on Friday night at Leanne Field in Edon.

Edon quarterback Drew Gallehue throws the ball in the Bombers’ game against Hilltop on Friday night at Leanne Field in Edon.

The 6-foot-4, 215 pound junior threw a single-game school record six touchdowns to lead the Bombers in a 61-6 win against the Cadets at Leanne Field in Edon.

“It’s a new offense for him, so there’s some things he’s still not seeing, but I’m proud of him for what he was able to accomplish,” Edon coach Bob Olwin said. “He’s a great kid and deserves what he gets. But he couldn’t do it without the offensive line and the receivers catching the ball for him.”

In his record-setting performance, Gallehue went 18 of 27 for 266 yards. Backup quarterback and wide receiver Caden Nester went 5 of 8 for 99 yards, while catching three passes for 28 yards and a touchdown. Of the Bombers’ 372 total yards, 365 came through the air.

Running back Andyn Haynes led Hilltop (0-2, 0-1 in TAAC) with nine rushes for 73 yards and a touchdown. The Cadets only totaled 77 yards while starting quarterback Connor Schlosser exited the game after the first play of the night because of a knee injury.

“It was rough,” Hilltop coach Nate Massie said. “We’re going to work on our offense and figure out what we want to do.”

The Bombers started the scoring early with a 1-yard run by Dye, making it 6-0 with 7:50 left in the first quarter.

After a three-and-out by Hilltop, Gallehue found Nester for a 9-yard touchdown to give Edon a 12-0 lead with 4:44 left.

On the first play of next Hilltop drive, Edon linebacker Destin McCartney picked off Haynes, who filled in for Schlosser, and returned it 25 yards. A two-point conversion made it 20-0 with 4:27 left in the first quarter.

While Sean Payton revels in Taysom Hill’s diverse skills, Matt LaFleur and Packers can only wonder what might’ve been

“Doesn’t matter how many reps you get in practice, you’re not always prepared for that,” Massie said. “It happens. We did all that we could.”

Haynes threw another interception to Nester, who also plays linebacker, on the second play of the following drive, setting up the Bombers at Hilltop’s 9-yard line. Gallehue then connected with Kiess from six yards out to extend Edon’s lead to 26-0, which the Bombers held going into the second quarter.

“It excites us and demoralizes them,” Olwin said. “(Football) is an emotional game, and those are the things you’re looking to do. And we work on strips, getting fumble recoveries, picks every day in practice.

“So it’s nice to see the things we’re practicing, we’re starting to do.”

With 10:56 left in the second quarter, Gallehue tossed it 49 yards to Kiess for a score to give Edon a 33-0 advantage. Later in the half, Gallehue found Dye again for a 6-yard touchdown to lead the Cadets 40-0 with 5:23 left.

Gallehue found Steinke for a 20-yard touchdown pass with 1:30 left to give the Bombers a 46-0 lead going into halftime.

Edon didn’t score again until there was 6:12 left in the third quarter as Gallehue found Wade Parrish for a 9-yard score to make it 53-0.

It would remain that way until Nester found Towers in the end zone for a 26-yard score to give Edon a 61-6 advantage with 5:48 left in the game.

“We seemed to fly around during practice better this week, and we carried that over into the game,” Olwin said. “We took advantage of some turnovers … We’re still making mistakes, but I’m proud of the kids for playing hard.”