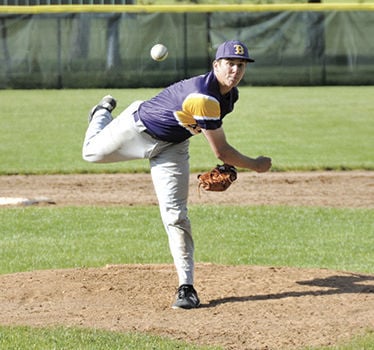 Bryan’s Benny Roebuck delivers a pitch during an ACME baseball game against Anthony Wayne at Sumpter Field in Bryan on Monday. RYAN SQUANDA/Staff 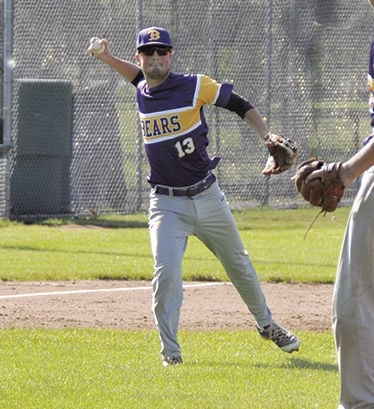 Bryan’s Logan Clemens looks to throw to first base during an ACME baseball game against Anthony Wayne at Sumpter Field in Bryan on Monday. RYAN SQUANDA/Staff

Bryan’s Benny Roebuck delivers a pitch during an ACME baseball game against Anthony Wayne at Sumpter Field in Bryan on Monday. RYAN SQUANDA/Staff

Bryan’s Logan Clemens looks to throw to first base during an ACME baseball game against Anthony Wayne at Sumpter Field in Bryan on Monday. RYAN SQUANDA/Staff

The Bryan ACME baseball continued its winning ways on Monday with a sweep of the Anthony Wayne Generals in a doubleheader at Sumpter Field in Bryan. The Golden Bears won the first game 3-0 and the second game 7-2 to improve to 6-0 on the summer.

Bryan opened up the first game with a pair of first-inning runs from Brooks Brown and Nate Miller to take an early 2-0 advantage. Miller scored another run during the bottom of the sixth and the three runs were all the Bears needed to cruise to victory.

Pitcher Benny Roebuck took care of the rest on the mound. He went all seven innings, gave up three hits and struck out 10 Anthony Wayne batters.

“Benny started out really well tonight,” Bryan coach Doug Williamson said. “I was proud of him. The way he played shortstop in the second game, he started cramping up a little bit there, but he hung in there and played tough. He was a big key tonight for us, pitching-wise and at shortstop.”

Bryan got off to a similarly fast start during the second game. Miller singled Quinn Brown home during the bottom of the first and Miller later came into score on a Breven Deckrosh blooper to shallow center field to give Bryan a 2-0 lead after one inning.

Bryan took a 3-0 advantage after two innings when Dom James scored on a Brooks Brown groundout.

And even after Anthony Wayne countered with a run during the top of the third, the Bears answered with four runs during the bottom of the fourth to take a 7-1 lead. Brooks Brown singled home James, a sacrifice bunt from Quinn Brown scored Clayton Rupp, a Miller double brought Brooks home and a single from Logan Clemens scored Miller.

In its final scoring opportunity of the night, Anthony Wayne tacked on a run during the top of the seventh and eventually loaded the bases after that. But the Bryan defense held strong to win 7-2 and complete the sweep.

Trevor Ward earned the win during the second game. He went four innings, gave up one hit, one run, struck out one and walked two.

“The season has been going pretty good,” Williamson said. “We’ve been hitting and pitching has been really good. We’ve been shutting teams down. ... We’ve been coming out, scoring early and putting the pressure on our opponents. And then the pitching has been phenomenal. I think out of six games now, we’ve had three runs scored on us.”

Williamson said it’s been a promising start to the season for Bryan’s ACME team, a program coming off of a 2018 ACME State Championship. And while that’s certainly a goal of Bryan’s as it heads into the 2019 campaign, Williamson said he’s not trying to put that pressure on his kids at this point in the season.

“I don’t want to put that in our minds right now,” he said. “We still want to go after it, don’t get me wrong. We want to repeat. We want to prove to everybody that we’re still the team to come after. ... But I want them to stay relaxed. We’re playing really well ... but we should make a run at it.”