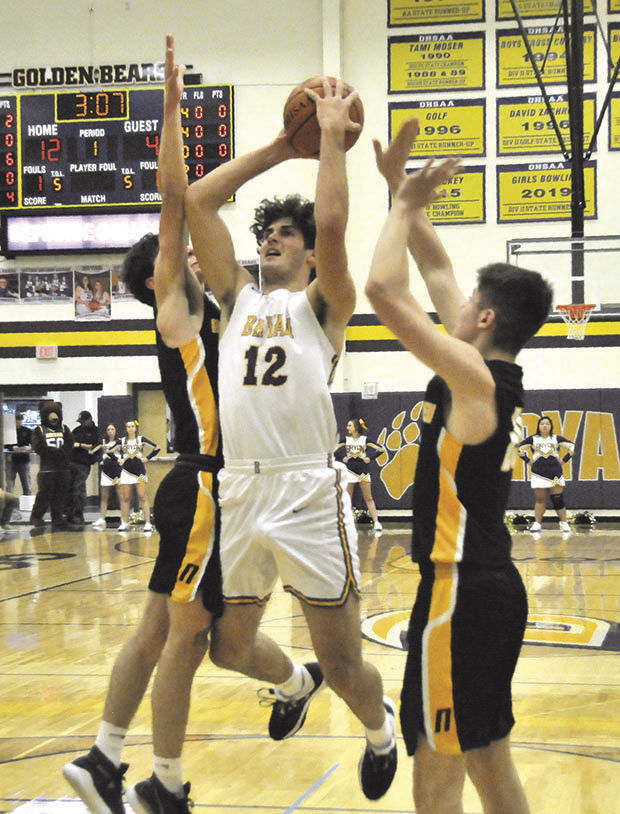 Bryan junior Titus Rohrer goes up for a shot between a pair of Northview defenders during a basketball game in Bryan on Saturday. RYAN SQUANDA/Staff 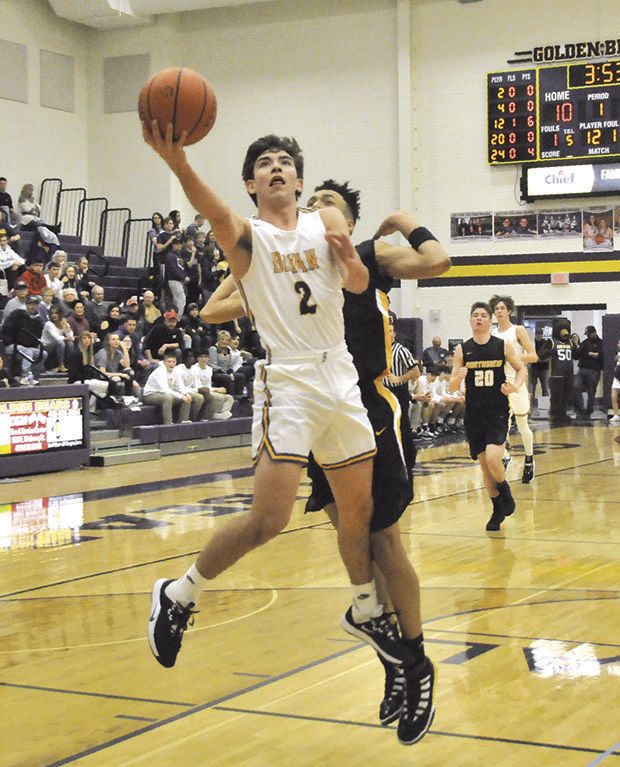 Bryan’s Connor Arthur goes up for a layup during a basketball game against Sylvania Northview in Bryan on Saturday. RYAN SQUANDA/Staff

Bryan junior Titus Rohrer goes up for a shot between a pair of Northview defenders during a basketball game in Bryan on Saturday. RYAN SQUANDA/Staff

Bryan’s Connor Arthur goes up for a layup during a basketball game against Sylvania Northview in Bryan on Saturday. RYAN SQUANDA/Staff

The Bryan boys basketball team let victory slip through its fingers during its past couple of matchups with the Sylvania Northview Wildcats.

In 2018, the Golden Bears saw a double-digit victory disappear with the blink of an eye, while in 2019, a top-ranked Wildcats team won on a buzzer beater to beat the Bears.

So on Saturday, after Bryan used a 14-2 run to close the game and break away to a 53-42 victory against the Wildcats, Bryan coach Brandon Fisher said he couldn’t be prouder.

“I think it’s huge for our kids and the program, because the last couple years, we played them both times while they were undefeated and top 10 in the state in D1, and we kind of lost to them at the buzzer both times,” Fisher said. “They’re a really different team this year. ... But our kids’ effort was excellent tonight. Everything didn’t go perfectly, but they made up for it with some hustle plays that you’ve got to have to win games like that.”

However, after the initial Bryan flurry to start the game, Northview settled down, and with a steady diet of 6-foot-6 sophomore Sean Craig dominating on offense, the Wildcats managed to close Bryan’s lead to 23-20 at the half.

Craig scored 14 of his team’s 20 first-half points and went on to finish the night with 22 points and 10 rebounds.

“He’s a problem for everybody that plays them,” Fisher said. “He’s incredibly talented, can finish really well and has a good motor. ... Tonight, we couldn’t just straight up guard him man-to-man the entire game, because they’re so athletic. We had to run some zone, and he got a few gaps on us.

“But we had to live with that, and take away other people as well. There’s games where he’ll get 25 points, 16 rebounds and get kick-outs to a bunch of kids for 3-pointers. We didn’t want that to happen, and I think our zone helped out a lot and kind of slowed them down.”

Northview took its first lead of the night when a Grant Hartnett 3-pointer gave the Wildcats a 25-23 advantage at the 5:25 mark of the third quarter. Bryan responded, though, and took a 33-30 lead into the fourth quarter.

The two teams went back and forth for most of the final stanza, and with a Tyler Summers bucket with 3:01 to go, Northview took a 40-39 lead.

Bryan senior Caleb Zuver responded with a clutch 3-pointer on the other end, though, which put the Bears up 42-40 with 2:10 to play. Then, after an empty Northview possession, Reese Jackson connected on a bucket to put Bryan up 44-40 at the 1:40 mark.

Northview never found its footing on offense down the final stretch of the game, as the Bears proceeded to pull away at the free-throw line.

Bryan got a monster performance from junior big man Titus Rohrer on Saturday. Rohrer finished the game with 23 points, 10 rebounds and often times was matched up against Craig on the inside.

“We knew (Northview) was going to be good,” Rohrer said. “We scouted them, and we did all the preparation throughout the week. ... Coach kept reminding us at practices what they did to us in the past and not to let them steal another one from us. We knew we owed them one coming in.

“Personally, I’m just super excited. I love playing in big games like these, especially when I know some stuff has been taken from us in the past. I come out every game with same attitude. I’m going to give my team the best shot that I have.”