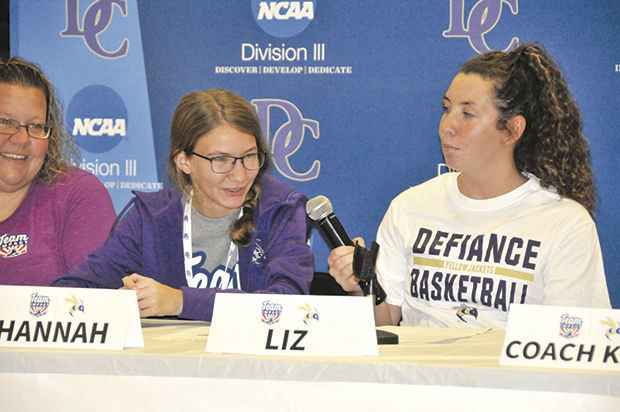 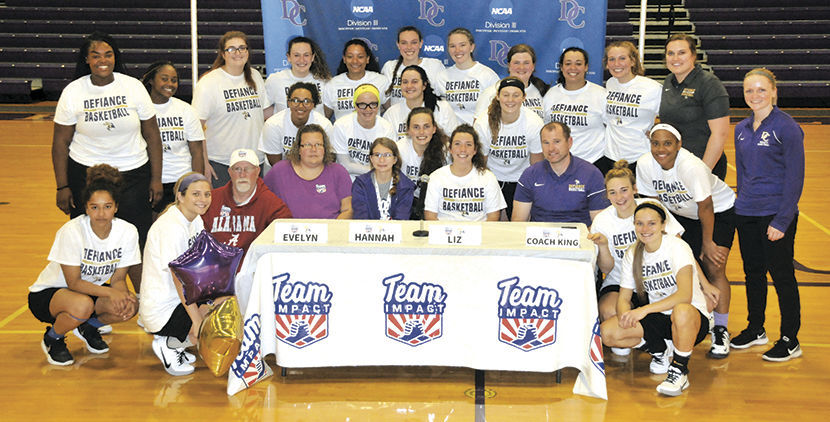 DEFIANCE — The Defiance College women’s basketball team, in conjunction with Team IMPACT, held a special ceremony for 14-year-old Bryan resident Hannah Colbert to sign a letter of intent and become an official member of the Yellow Jackets team on Sunday.

According to a press release, Team IMPACT is a national nonprofit that connects children facing serious illnesses with college athletic teams.

Colbert, a freshman cheerleader at Bryan High School who has battled epilepsy and other illnesses since she was young, can’t participate in sports due to health concerns, so Sunday’s ceremony was a big deal for her and her family.

“She’s excited about just being around everybody and having a support group for her,” Hannah’s mother, Evelyn, said. “I think it’s going to be awesome. She’s going to have a busy schedule, because she’s a basketball cheerleader at Bryan, too. She just made the team for that.”

As a member of the Defiance College team, Hannah will attend practices, games, team dinners, events and more. Although the festivities of the letter-of-intent signing made things official on Sunday, Hannah has already been involved with the Yellow Jackets for several months. Members of the team recently even came to watch her cheer at a Bryan football game.

“Team IMPACT is an opportunity for us, as well as Hannah, to have an impact on each other,” Defiance College women’s basketball coach Allan King Jr. said. “Hannah has had a lot of different obstacles in her life that she has overcome already and is going to continue to overcome. So she’s becoming a member of our basketball team to help teach us how to overcome a lot of different obstacles in life and on the court. And we’re excited and so happy to have her as a part of our basketball team.”

The program is technically scheduled to run for at least two years, but King Jr. envisions a much longer relationship than that.

With ‘work to do’ to catch Super Bowl-bound 49ers, Brian Gutekunst and Packers aim to close gap, build on 2019 success

Former Arizona Wildcats DC Marcel Yates gets a new job, and it's in the Pac-12