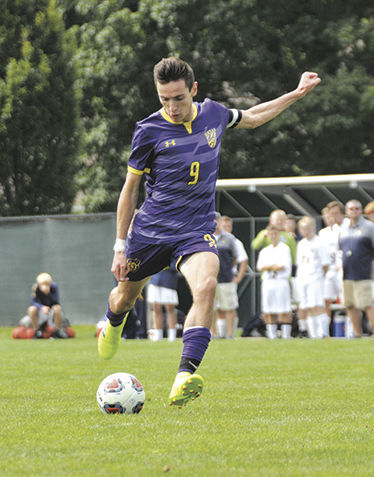 Bryan’s Tyler Manon prepares to kick the ball up the field during a soccer game against Ottawa-Glandorf at Recreation Park in Bryan on Saturday. RYAN SQUANDA/Staff 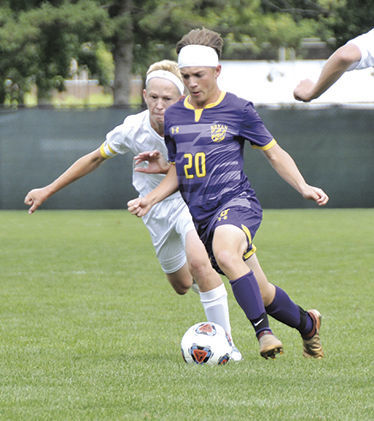 Bryan’s Quinn Brown works the ball around a defender during a soccer game against Ottawa-Glandorf at Recreation Park in Bryan on Saturday. RYAN SQUANDA/Staff

Bryan’s Tyler Manon prepares to kick the ball up the field during a soccer game against Ottawa-Glandorf at Recreation Park in Bryan on Saturday. RYAN SQUANDA/Staff

Bryan’s Quinn Brown works the ball around a defender during a soccer game against Ottawa-Glandorf at Recreation Park in Bryan on Saturday. RYAN SQUANDA/Staff

There was less than a minute remaining of a game against Ottawa-Glandorf on Saturday and the Bryan boys soccer team looked like it was on its way to a 2-1 victory.

But a goal by Ottawa-Glandorf’s Derek Crumrine with 21.1 seconds remaining changed all that and allowed the Titans to erase the late deficit and tie 2-2 with the Bears at Recreation Park in Bryan.

“I’m getting sick of these ties,” Bryan coach Luke Collins joked since his Bears have tied three times in four games. “But we played the game plan that we’ve been working on playing and we played it perfectly. We possessed the ball probably 75 percent of the game. We had complete control. We were passing and moving and creating the opportunities in space. Unfortunately, we just couldn’t get any in the back of the net.”

After the Titans took the initial 1-0 lead in Saturday’s contest, Bryan fought back to tie things just before the half.

With Bryan (2-0-3) threatening, Ottawa-Glandorf’s goalie illegally caught the ball when a teammate — attempting to save the ball from going in the goal — kicked the ball back to him.

This gave the Bears an indirect free kick a few yards from the net, where Bryan’s Brendan Reiser tapped the ball to Tyler Manon, who punched one through to help Bryan tie the game at 1-1 with 13 seconds left in the half.

Bryan dominated possession for much of the second half and took a 2-1 lead with 13:40 to go in the game when Manon crossed a pass to teammate Quinn Brown, who slipped one past the O-G goaltender.

The lead didn’t hold, however, as O-G responded with the last-minute goal to tie the game at 2-2.

“I’m pretty happy with the performance ... I really am,” Collins said. “To get scored on in the last minute is brutal. ... But now it’s just about finishing the opportunity that we’re creating, because it’s not like we’re not creating the opportunities, we’re just not putting them away.”