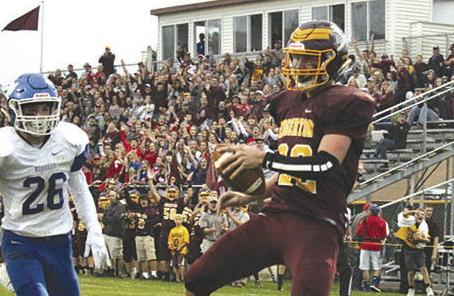 Edgerton’s Logan Showalter hauls in a touchdown pass as Edon’s Keagen Romine trails in defense during a football game on Sept. 6, 2019 at Stauffer Field in Edgerton. 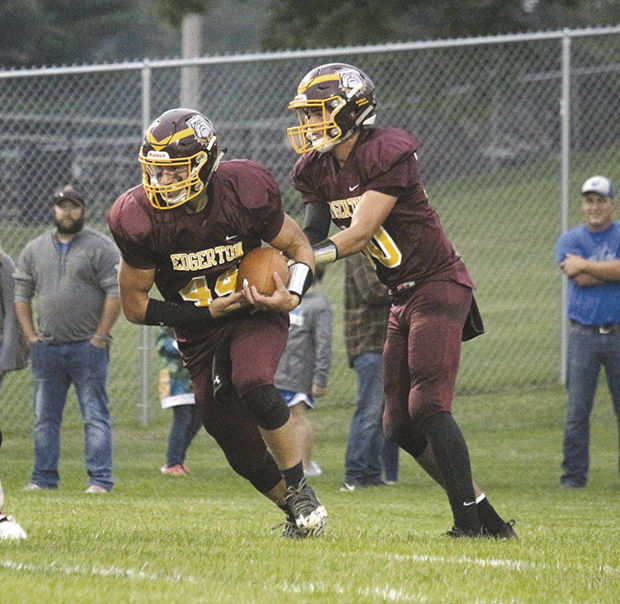 Edgerton’s Hunter Prince takes a handoff from teammate Jaron Cape during a football game against Edon on Sept. 6, 2019, at Stauffer Field in Edgerton.

Edgerton’s Logan Showalter hauls in a touchdown pass as Edon’s Keagen Romine trails in defense during a football game on Sept. 6, 2019 at Stauffer Field in Edgerton.

Edgerton’s Hunter Prince takes a handoff from teammate Jaron Cape during a football game against Edon on Sept. 6, 2019, at Stauffer Field in Edgerton.

Edgerton’s class of 2020 football seniors accomplished a lot in their four years on the gridiron. A 36-10 overall record, four winning seasons, three playoff appearances and an undefeated regular season and Green Meadows Conference championship in 2018 encapsulates just some of what the group was able to do.

And now two of those seniors — Hunter Prince and Logan Showalter — have committed to continue their careers together at Ohio Northern University, an NCAA Division III school in Ada.

Prince and Showalter said they went on visits to a few similar schools throughout their respective recruiting processes, and after each visit, they’d discuss what they liked about each particular school.

When it came time to make a decision, they agreed their favorite school of the bunch was Ohio Northern, where they plan on rooming together in the fall.

“I’m excited to get back on the field,” Showalter said. “At the beginning of this past season, I wasn’t sure if I wanted to keep playing, but then at the end I knew I wasn’t finished. ... ONU really just stood out. Their campus is beautiful, the coaching staff is nice and they have a really good family atmosphere at the college, and not just with the football team.”

Prince expressed similar sentiments about Ohio Northern, and in what was ultimately a tough decision for him between Ohio Northern and Heidelberg, he felt Ohio Northern had a bit more to offer — which included the opportunity to compete as a sprinter for the Polar Bears’ track team, as well as the chance to play with his high school teammate. After all, they’ve had a lot of success together to this point, so they’re excited to keep it going.

“As Logan and I have been playing together at Edgerton, we helped build the program up a lot,” Prince said. “And hopefully we can do the same at Ohio Northern and build them up to be a prominent college football program.”

Prince and Showalter played important roles to Edgerton’s success the past few years. Prince had a record-breaking career at running back for the Bulldogs, racking up 6,312 yards rushing and 101 total touchdowns as a four-year letter winner. As a senior, Prince was named the Ohio Prep Sportswriters Association Division VII Offensive Player of the Year after running for 1,887 yards and 29 touchdowns.

Showalter, meanwhile, carved out a niche as one of Edgerton’s most versatile players. As a senior defensive end/linebacker, Showalter led the Bulldogs with 62 total tackles, seven sacks and 13 tackles for loss. He also had three fumble recoveries and returned two for touchdowns. On offense, he was Edgerton’s leading receiver with 34 catches for 523 yards and eight touchdowns.

Former Edgerton football coach Ben Wilhelm, who coached the duo for the entirety of their high school careers, said both exhibited hard-working leadership abilities throughout high school, and he knows they can continue to be successful at the college level.

“That’s exciting,” Wilhelm said. “They both had some great careers here at the high school level at Edgerton, and if they put the work in, that will continue when they get to the next level. I think they both understand that it’s a different game and competition is going to be high, but they’re ready to meet that challenge.”

Both of the seniors were also quick to credit their experiences at Edgerton as something that shaped them for their next opportunity.

“This entire town, it’s a very giving community,” Showalter said. “And the coaching staff, they always pushed us to be the best of ourselves so we could go as far as we did our junior and senior year and so we could beat the teams we beat.”

“I think at the college level, you’ve got to have a lot of discipline and you have to have a good work ethic, and Coach Wilhelm really installed that in us,” Prince added. “Edgerton has gotten us ready for ONU by giving us the ability to pay attention to the fine details, something we’ve had pounded into our heads.

“It will definitely help in the next level of play ... It will separate us from others, whether it’s blocking schemes, where to make your cuts or carrying out your fakes.”

Prince plans to study exercise science, while Showalter will pursue a business degree with the goal of going into sports marketing.

As Packers ready — virtually — for Year 2 of Matt LaFleur's offense, will odd offseason stunt its growth?

Steven M. Sipple: How will Moos be judged as Husker AD? The pandemic will have large say