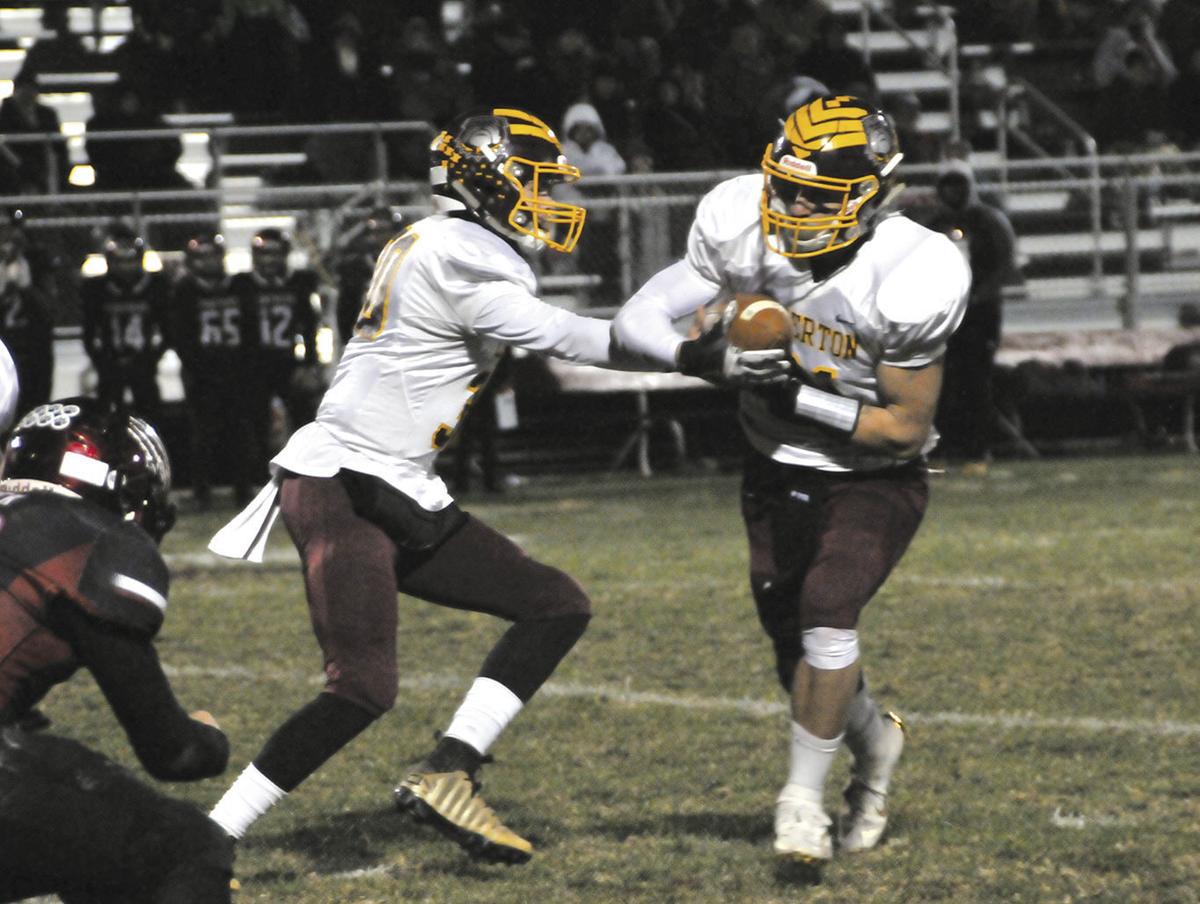 Edgerton’s Jaron Cape hands the ball off to Hunter Prince during a playoff football game against McComb on Saturday. RYAN SQUANDA/Staff 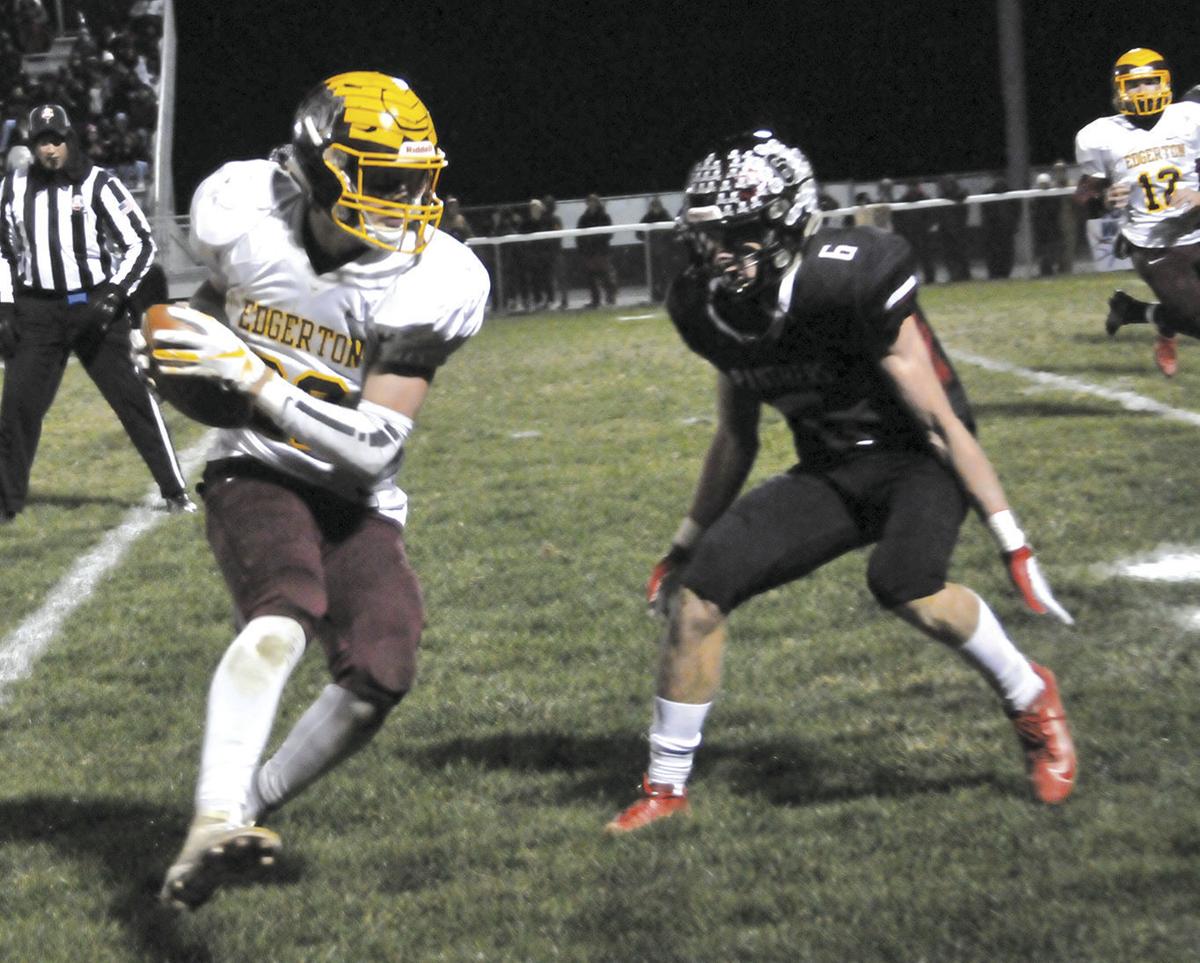 Edgerton’s Logan Showalter makes a catch and looks to make a move on McComb’s Aaron Davis during a playoff football game in McComb on Saturday. RYAN SQUANDA/Staff

Edgerton’s Jaron Cape hands the ball off to Hunter Prince during a playoff football game against McComb on Saturday. RYAN SQUANDA/Staff

Edgerton’s Logan Showalter makes a catch and looks to make a move on McComb’s Aaron Davis during a playoff football game in McComb on Saturday. RYAN SQUANDA/Staff

McCOMB — A year ago it was a plethora of early mistakes that led to Edgerton’s demise in the regional final against the eventual state champion McComb Panthers.

Saturday was a different story, though, as Edgerton controlled the game from the beginning and pulled away to beat McComb 44-21 in a Division VII regional quarterfinal game at Doc Miller Field in McComb.

“These guys came out, and we played well,” Edgerton coach Ben Wilhelm said. “I think we were prepared. In last year’s game, we made a lot of mistakes execution-wise and had a lot of turnovers that didn’t need to happen. We were able to take advantage of the mistakes McComb made this year.

“But it comes down to our guys making those decisions to execute. ... So I’m proud of our guys. They prepared well this week, and they were not going to leave here without winning. I say that with humility, but they wanted to win this game tonight.”

The Bulldogs (9-2) took the initial lead in Saturday’s contest by driving the ball 51 yards on the game’s opening drive to score on a Hunter Prince 5-yard touchdown. Prince also punched in the 2-point conversion and Edgerton led 8-0 at the 6:41 mark of the first quarter.

McComb (8-3) countered with a touchdown drive of its own, however. Quarterback Aaron Davis scored on a 14-yard keeper, and after a 2-point conversion, the game was knotted at 8-8 with 3:16 left in the first quarter.

Edgerton continued to move the ball on its next drive, where Prince scored from 10 yards out at the 1:27 mark of the first quarter, and the Bulldogs led 14-8.

Prince later scored his third touchdown of the first half with a 6-yard run with 7:47 to go in the half, which helped Edgerton to a 22-8 advantage, a lead the Bulldogs would eventually take into the break.

McComb had an opportunity for some points late in the second quarter, but Edgerton’s defense made a fourth-down stop from the 5-yard line with 44 seconds left in the half.

The Panthers came out on fire during the second half. Davis found Zach Deal for a 22-yard touchdown pass to close Edgerton’s lead to 22-15 at the 8:42 mark of the third quarter.

Then, after Edgerton’s offense was stopped on a fourth down deep in McComb territory, the Panthers drove it down the field again, this time scoring on a Davis 39-yard pass to Ka’Von Bailey. The extra point was no good, though, so Edgerton clung to a narrow 22-21 lead with 2:02 to go in the third quarter.

With all the momentum on McComb’s side, Edgerton found a way to answer on its next drive when Gannon Ripke broke free for a 44-yard touchdown run. Prince punched in the 2-point conversion, and the Bulldogs were up 29-21 with 20 seconds left in the quarter.

“They knew that it was the next play mentality,” Wilhelm said. “When it comes down to that, we have to keep our eyes off the scoreboard and just understand that we were in the driver’s seat coming out of the half, and as long as we were able to slow down the offense and put points on the board when we had the football, that we would be able to make good things happen.”

During the fourth quarter, the Bulldogs gradually pulled away. Prince scored his fourth touchdown of the night on a 4-yard run to push Edgerton’s lead to 36-21 with 6:11 to go in the game.

On McComb’s next possession, Davis was intercepted by Nolan Swank with 2:12 to play, and Prince proceeded to ice the game on a 25-yard run for his fifth touchdown of the night. Prince finished the night with 171 yards rushing to go along with his five touchdowns.

“It was a big win,” Prince said. “We definitely pushed it in practice this week, and it feels good that it’s paying off, and we can finally get this monkey off our back. I don’t think we’ve ever beaten McComb in a playoff game, and it’s definitely good revenge from last year.

“We knew a lot more about how it was going to be coming into this game. We were a lot more prepared for it, and it definitely showed tonight.”

Edgerton moves on to face Leipsic in a Division VII, Region 26 semifinal this coming Saturday at Buckenmeyer Stadium in Napoleon. Leipsic (10-1) beat Mohawk 30-8 on Saturday.