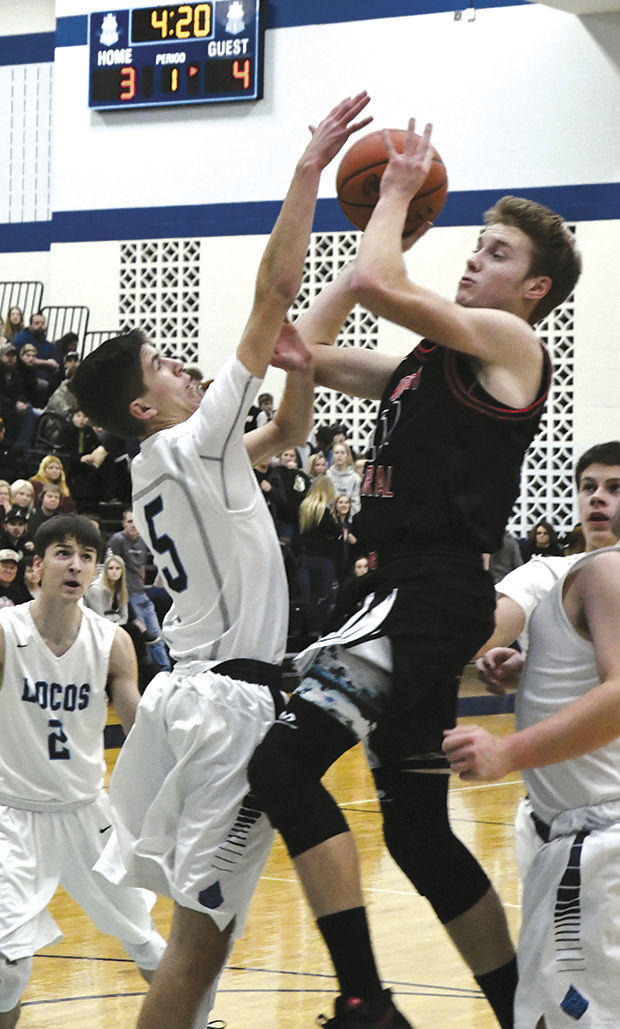 North Central’s Landon Patten goes up for a shot as Montpelier’s Thomas Jay defends during a basketball game in Montpelier on Thursday. GLYN BUNTAIN/Staff 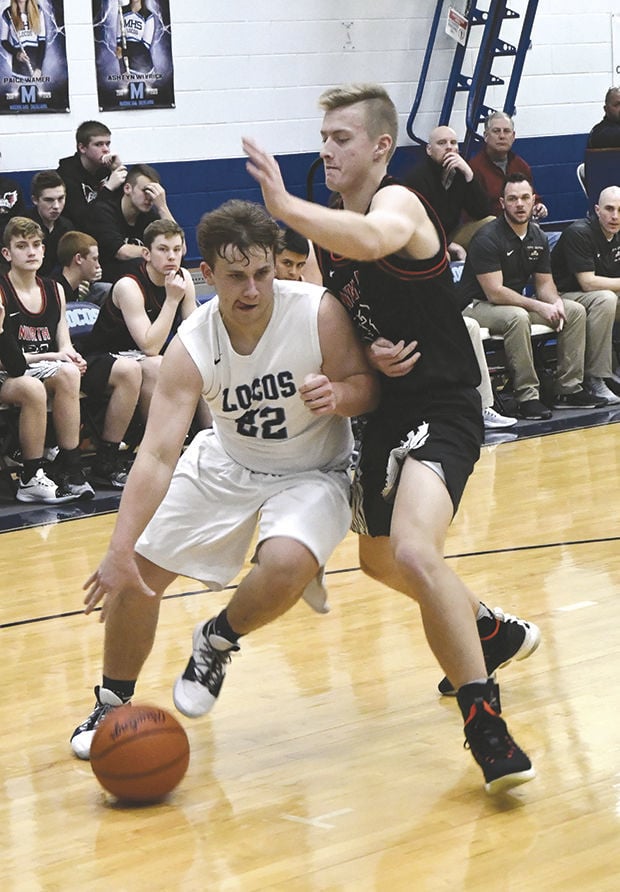 North Central’s Landon Patten goes up for a shot as Montpelier’s Thomas Jay defends during a basketball game in Montpelier on Thursday. GLYN BUNTAIN/Staff

MONTPELIER — Montpelier’s boys basketball team erased what was once a 12-point deficit to take a 40-39 lead late against North Central on Thursday, but the Eagles responded to score the game’s final six points and escape with a 45-40 victory.

Even when the game appeared to be slipping away from North Central’s fingertips, Eagles coach Chris Fidler preached to his veteran squad the importance of having composure in the moment.

“Having a handful of returning players, we talked about playing composed with pressure,” Fidler said. “Having a lot of seniors on the floor, we have to learn how to play with some composure under some pressure situations if we want to be successful. So I think the boys did a pretty good job of responding. Montpelier gave us everything that we could handle.”

North Central (2-0, 2-0 Buckeye Border Conference) led for the majority of Thursday’s contest. Montpelier (0-3, 0-2) took an early 1-0 lead on a Rowen Beck free throw, but North Central took control for the rest of the first half.

The Eagles led 25-17 at the break and eventually built their lead to 31-19 when Alex Lehsten hit a bucket with about three minutes left in the third quarter.

Montpelier went on a furious rally from there. With a stretch that included five 3-pointers, the Locomotives took a 40-39 lead on a Tylor Yahraus triple at the 2:50 mark of the fourth quarter.

“They made some open shots,” Fidler said. “And nothing against Montpelier, but our defensive pressure and intensity kind of slacked off a little bit. Tylor Yahraus and Thomas Jay, they’re both phenomenal shooters, and they started catching fire. That was one of the things in the game plan we talked about: We can’t let them catch fire.”

North Central’s Landon Patten responded with a pair of free throws on the other end to put the Eagles up 41-40, and after the teams traded a few empty possessions, Lehsten hit a bucket to give the Eagles a 43-40 lead with 39 seconds to play.

Blake Altaffer and Yahraus each had looks to tie the game on Montpelier’s ensuing possession, but couldn’t get their shots to drop.

North Central gathered possession, and Zack Hayes proceeded to sink a pair of free throws with 4.0 seconds remaining to ice the game and give the Eagles the five-point victory.

Montpelier was led 18 points from Jay and 12 from Yahraus.

Thursday’s game wasn’t the end result Montpelier hoped for, but coach Justin Houk was proud of the way his boys battled back.

“It just didn’t go our way at the end,” Houk said. “But I was excited about our effort. Our effort from last Friday to today in less than a week, our effort was there and where it needs to be. Hopefully, it can continue to progress throughout the season.”

With ‘work to do’ to catch Super Bowl-bound 49ers, Brian Gutekunst and Packers aim to close gap, build on 2019 success

Former Arizona Wildcats DC Marcel Yates gets a new job, and it's in the Pac-12