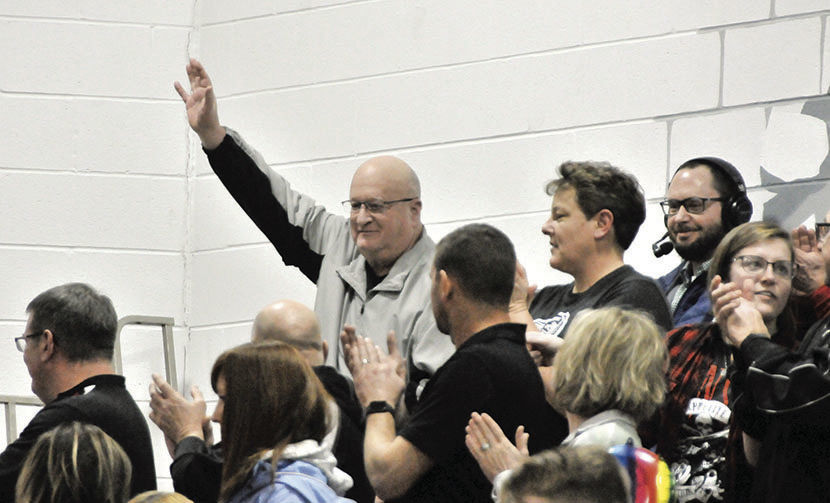 Ric Heisler waves in appreciation to the North Central crowd as it gives him a standing ovation prior to a game against Fayette on Feb. 21 in Pioneer. 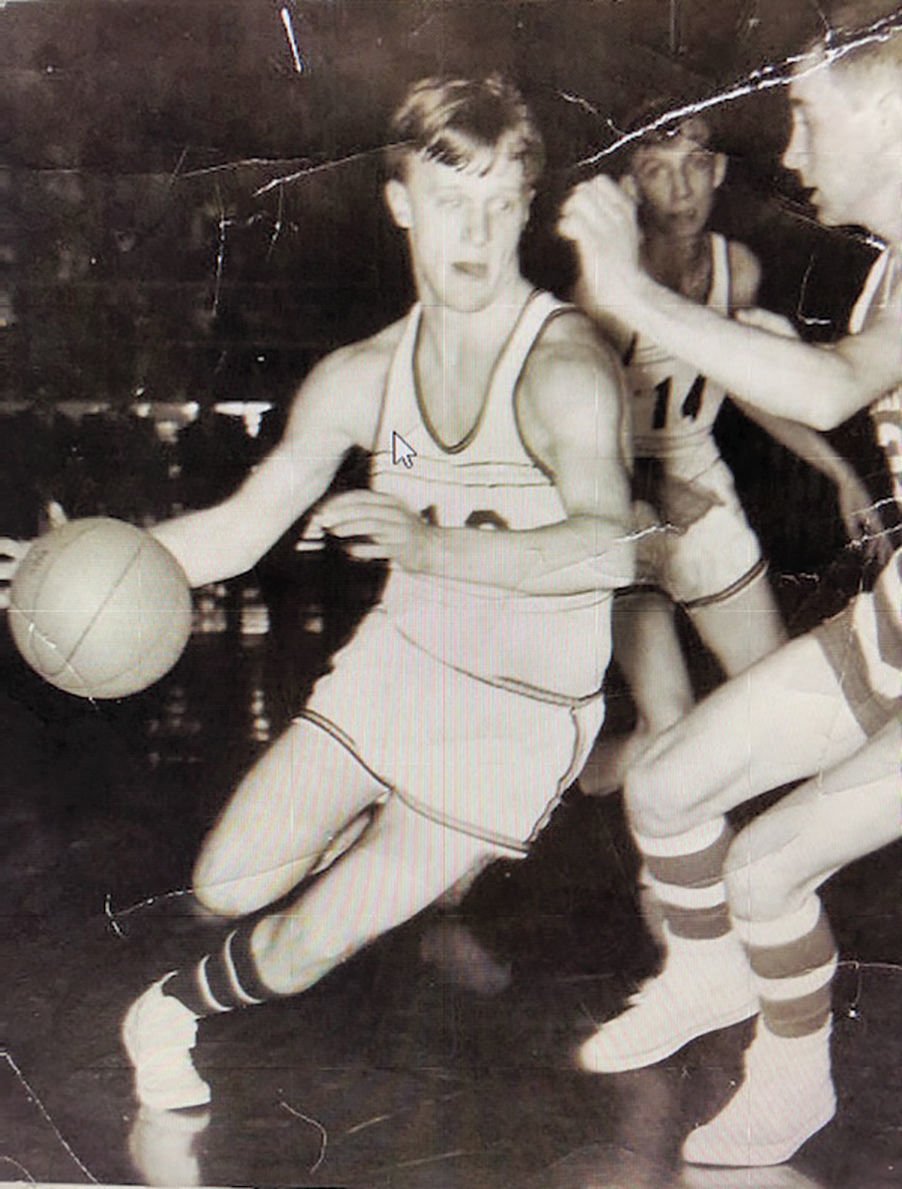 Ric Heisler drives to the basket as an Edgerton basketball player during a 1968 sectional game against Stryker. 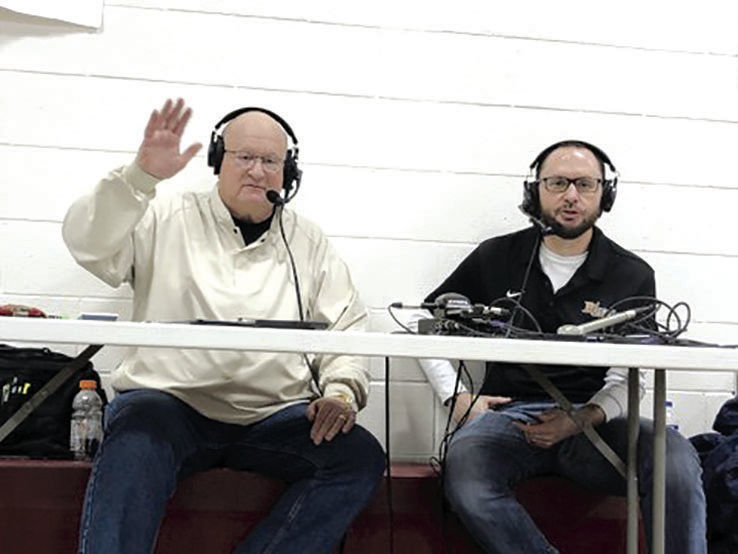 Ric Heisler, left, and Andy Brigle broadcast a game between the Edgerton and Fairview boys basketball teams on Jan. 9 in Edgerton.

Ric Heisler waves in appreciation to the North Central crowd as it gives him a standing ovation prior to a game against Fayette on Feb. 21 in Pioneer.

Ric Heisler drives to the basket as an Edgerton basketball player during a 1968 sectional game against Stryker.

Ric Heisler, left, and Andy Brigle broadcast a game between the Edgerton and Fairview boys basketball teams on Jan. 9 in Edgerton.

The Montpelier and Fairview boys basketball teams were minutes from tipoff at The Railyard in Montpelier on Feb. 20 when the attention of the crowd was directed toward the crow’s nest above the scorer’s table, where longtime WBNO sports color commentator Ric Heisler sat ready for a job he’s done for the past 27 years.

Heisler, 69, was in the midst of his final year calling games on the radio, which he’s done alongside play-by-play man Andy Brigle since 1993. But his contribution to the area’s sports scene stretches far beyond that.

As a star athlete and 1968 graduate of Edgerton High School, a four-year baseball player at Defiance College, followed by a decades-long teaching and coaching career at Ottoville, Edon, Fairview and Montpelier, Heisler has touched a lot of people in his life, and Montpelier wanted to recognize him for those efforts prior to the last game he’d call at the school.

“At the end of the season he will be hanging up the microphone, and he will stop carrying my brother (Andy),” Montpelier athletic director Joe Brigle quipped over the gym’s sound system. “We know in this dynamic duo who the real star is. So on behalf of the Montpelier school district, thank you from the bottom of our hearts for all you do in the service and dedication to sports in Williams County.”

Cheers and applause rang out from the Montpelier crowd as Heisler humbly waved in appreciation. He didn’t want any sort of farewell tour when he said the 2019-20 school year would be his last one on the airwaves. But as word spread, more and more schools around the area began taking their chances to say goodbye.

“It’s extremely surreal,” Heisler said. “I never thought what we were doing really mattered that much to people. But a few schools have honored me, and I was totally shocked by all that and extremely humbled. I enjoy doing this, and I thought that’s all there was to it, but it seems like there were some people around who have noticed what we’re doing, and I’m glad for that.”

The Legend of Heis

The legend of Ric Heisler begins with his 1960s teenage years growing up in Edgerton. Heisler was a two-sport star in baseball and basketball for the Bulldogs, earning all-state honors as a shortstop in baseball. To this day, he holds the Edgerton career record for hits (165) and home runs (23).

He continued his playing career in both sports at Defiance College. However, when dual-sporting became too much, he gave up basketball after his freshman year to focus more on baseball and school for the remainder of his college years.

Heisler graduated from Defiance College in 1972 with certifications to teach English and physical education, but it wasn’t until a few years later in the summer of 1974, when an encounter with his friend, Phil Muehlfeld, at a summer league softball game led to Heisler taking his first teaching and coaching job.

It all started when Heisler, who was playing shortstop that afternoon, disagreed with an umpire calling Muehlfeld safe when he slid under Heisler’s tag at second base. Heisler said the play led to some good-natured bickering and joking, which carried over to a local watering hole soon after. There, Muehlfeld, who had just taken the head boys basketball coaching job at Ottoville, asked Heisler if he’d like to join as his junior varsity coach.

It was an opportunity Heisler couldn’t pass up. And by their fourth year into the job in 1978, Muehlfled and Heisler had taken their boys to the state tournament. In addition, Heisler, who also coached the school’s baseball team, guided the Big Green to their first regional appearance.

Heisler’s early success at Ottoville led him to the head basketball job at Edon in the 1978-79 school year, and save for a year in the mid-1980s when he assisted Ralph Ruffer and the Fairview boys, he hasn’t left Williams County since. He eventually took a job at Montpelier, where he coached all levels of baseball and basketball until 1993 and taught until 2004.

Throughout the course of his career, Heisler earned somewhat of a Bobby Knight reputation. He was hard-nosed, tough and demanded a lot from his athletes, but today his former players can’t say enough about what they learned.

“He was very tough on me,” said 1989 Montpelier graduate Andrew Kiess, who today coaches the Edon boys basketball team. “Many halftimes he was in my face and demanding more out of me. As a young kid, I didn’t realize what he was trying to inspire me to do. … But he was always fair, and why I like him so much now, is I respect all the lessons he was trying to teach me as a young man.”

Heisler didn’t spare his intensity on anyone, either.

“I was his best player, and he wasn’t afraid to throw me out of practice a couple different times,” said Mike Bumb, a 1992 graduate of Montpelier who averaged close to 25 points per game his junior and senior seasons. Today, Bumb serves as the Montpelier girls basketball coach and says he applies a lot of Heisler’s principles to his own coaching.

“He threw me and his son, Brian Heisler, out of practice one time, because we weren’t giving enough effort. … If you were the best player on the team, he wanted to make an example of you, because he knew if he was tough on the best player on the team, everyone else would fall in line. … Sometimes that player maybe gets a free pass, and they don’t want to ruffle the feathers of him, because they need them to win … and that’s a big thing that I remember from Heis and I’ve taken with me.”

The amount of people Heisler mentored throughout the years is endless. Take Todd Grosjean for example. In the mid-1980s, Grosjean was a fresh-faced 20-something assistant on Heisler’s bench at Montpelier. Flash-forward to today, and Grosjean has gone on to a decades-long coaching career, including this year when he led the Bryan girls to a 16-7 record and a share of their first Northwest Ohio Athletic League title since 1993.

“He was a great mentor for me for just being out of college,” Grosjean said. “And I learned so much from him those five or six years that I helped him. … He was a great head coach, knew the game very well and he taught me a lot about doing things the right way.”

Tom Held, a 1980 Edon graduate who played basketball and baseball for Heisler, also had a lot to say about his former coach.

“Heis was a very large influence on my high school career,” said Held, the current Defiance baseball coach who’s led the Bulldogs to three state titles. “He pushed me to be the best athlete I could be, while also mentoring me on college decisions. He also influenced a lot of my own coaching philosophies. There are very few days that go by that I don’t reflect on what I learned from Coach Heisler.”

It was the fall of 1993, and with Heisler recently out of coaching, 104.5 WLZZ came to Heisler with the proposition to do the color commentary for Montpelier football. Wanting to stay in the realm of sports, Heisler jumped at the opportunity.

At the time, though, Montpelier football was the only sport WLZZ was carrying, and when the season came to a close, Heisler wanted to continue on with basketball and baseball, too. Luckily, Andy Brigle, a former student and player of Heisler’s at Montpelier, had just taken over the sports at 100.9 WBNO and was in need of a broadcast partner.

Having known Heisler all his life, Brigle said he immediately brought him on board. It proved to be a perfect fit, too, and with Heisler’s big personality and background as a coach, he soon became a fan favorite and star.

“The easy part of the whole thing was working together, because we knew each other so well,” Brigle said. “He’s extremely knowledgeable about the games. He’ll tell you football was not a strength of his … but he was a coach in basketball and baseball, and you still know kids and athletes as a coach. … And he’s a very good communicator, so if you’re listening to the broadcast, he does a really good job explaining some of the intricacies and strategies of the game.”

Over the years, Brigle and Heisler became the voice of Williams County sports, making countless memories and taking in decades of some of the area’s greatest teams and athletes along the way.

But after nearly three decades on the mic, Heisler will be calling it a career at the end of this school year.

Heisler had some thoughts of giving it up at the end of the 2018-19 school year, but late in the season, he had a change of heart.

“Let’s do one more year,” he said to Brigle.

Heisler wasn’t expecting any parties or recognition as he worked his last year of games, but Brigle and other local schools couldn’t help but organize pre-game ceremonies throughout the recent basketball season. JJ Winns Restaurant in Holiday City even threw a bash during one of Brigle’s Wednesday night radio shows.

“Our friendship will continue … but I’ll miss our regular day-to-day interactions,” Brigle said. “I’ll miss the games, but I think what I’ll miss the most is … those pre-game or post-game conversations about either the game that night or the rest of the season, or sometimes it wasn’t even about sports. … Ric was there alongside a lot of personal stuff in my life, so he became a de facto father figure or mentor. It’s a deeper relationship than work.”

But while he might be done calling the games on the radio, Heisler is far from done with the local sports scene. After all, a few of his grandchildren are up-and-coming athletes at Fairview, and he said one of the biggest reasons for his retirement is to chase them around.

“And I’d just like to say thank you to Andy,” he went on to say. “And all the fans through the years and their words of encouragement. ... It’s been a good trip, but it’s time for it to end.”