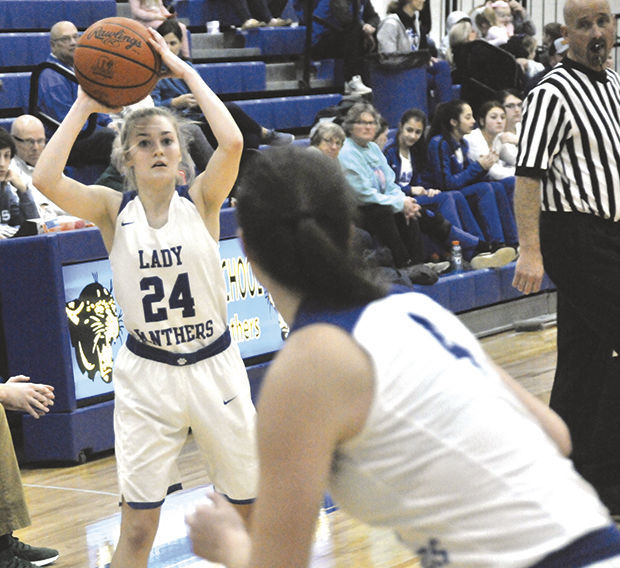 Stryker’s Haylee Fulk looks to make a pass into teammate Abby Grice during a basketball game against Tinora in Stryker on Tuesday. RYAN SQUANDA/Staff 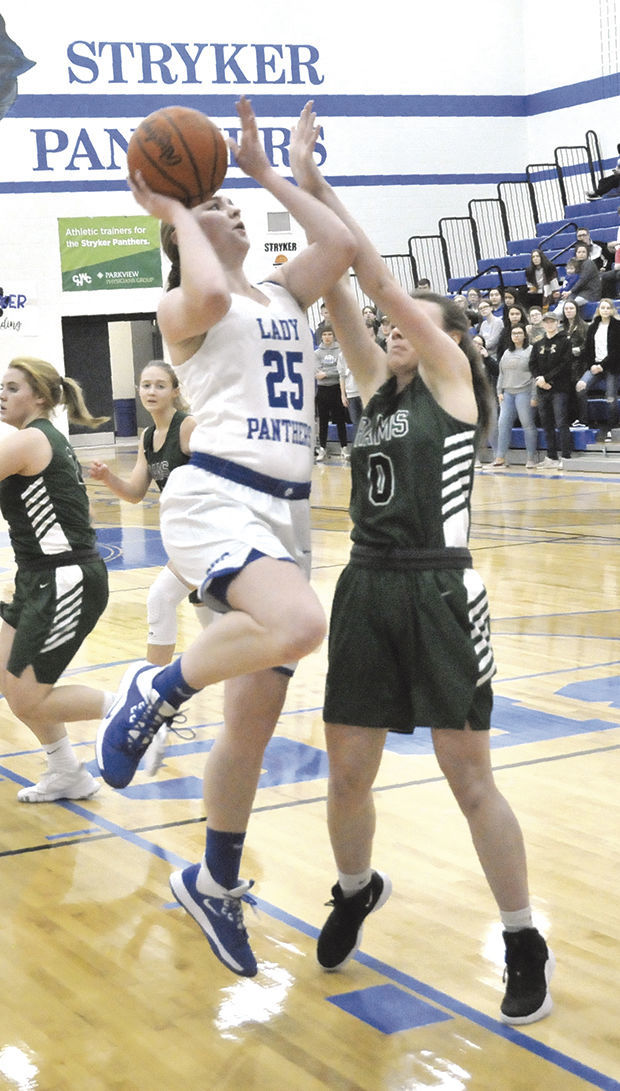 Stryker’s Kalista Blevins goes up for a shot as Tinora’s Amanda Meyer defends during a basketball game in Stryker on Tuesday. RYAN SQUANDA/Staff

Stryker’s Haylee Fulk looks to make a pass into teammate Abby Grice during a basketball game against Tinora in Stryker on Tuesday. RYAN SQUANDA/Staff

Stryker’s Kalista Blevins goes up for a shot as Tinora’s Amanda Meyer defends during a basketball game in Stryker on Tuesday. RYAN SQUANDA/Staff

STRYKER — Before the Stryker girls basketball team was able to rally for a 36-30 victory at home against the Tinora Rams on Tuesday, the Panthers had gotten off to a slow start.

Tinora (1-11) held a 9-2 lead at the end of the first quarter, and early in the second quarter, the Rams had stretched their advantage to 12-2.

A basket and a foul shot from Sage Woolace got the Panthers going at the 5:33 mark of the second quarter, though, and Stryker (6-6) proceeded to go on an 11-1 run, tying the game with a Kenzie Cadwell bucket with 1:18 left in the half.

Tinora’s Tristen Norden answered with a basket during the final minute of the half, and the Rams took a 15-13 lead into the break.

“It was a little bit of a rough start,” said Stryker assistant coach Conner Varner, who was acting as the head coach to lighten the load on head coach Steve Brown. Brown was recovering from surgery he had on Monday, but was still in attendance and on Stryker’s bench for Tuesday’s game.

“But I think we challenged them at halftime to come out there and guard and play hard,” Varner went on to say. “Everything we’re doing, just be more aggressive about it. Toward the end of the game, it got a little better.”

With Tinora leading 18-15 early in the third quarter, Stryker’s Kinsey Myers took charge by hitting a 3-pointer to tie the game at 18, a pair of free throws to put the Panthers up 20-18 and another 3-pointer in the closing minute of the quarter to help Stryker to a 25-19 lead heading into the fourth.

Kalista Blevins hit a pair of free throws shots early in the fourth quarter to give the Panthers a 27-19 advantage — Stryker’s largest lead of the night.

Tinora attempted to rally and cut Stryker’s lead to as little as 31-27 when Liv Mueller hit a 3-pointer with less than three minutes to go. But a shorthanded Stryker team — which had lost both Cadwell and Mallori Blevins to injury during the game — held strong down the stretch.

“Especially after a couple of our girls went down, we really didn’t have a bench after that,” Varner said. “I think we did good at bouncing back without Mallori Blevins or Kenzie Cadwell — two big people who are part of our team who we couldn’t use in that fourth quarter.”

Cadwell led Stryker with 10 points on the night, while Blevins and Myers each had eight. Tinora was led by 12 points from Norden.

All in all, not bad for Varner’s head coaching debut.

“(Coach Brown) and I basically have the same mind now,” Varner said. “From me playing under him for four years and now coaching under him for my sixth year and now we have another alumni (Taylor Haines) here, usually we’re on the same page. Maybe it was a little different with me yelling a little bit more.”

Stryker returns to action at Hilltop on Friday. Tinora hosts Ayersville on Friday.

Report: NFL says camps can only be held at team facilities

'My heart is broken': Penn State's James Franklin, AD speak out as protests continue across country