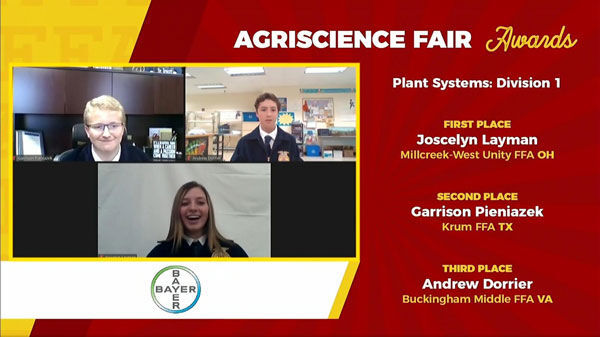 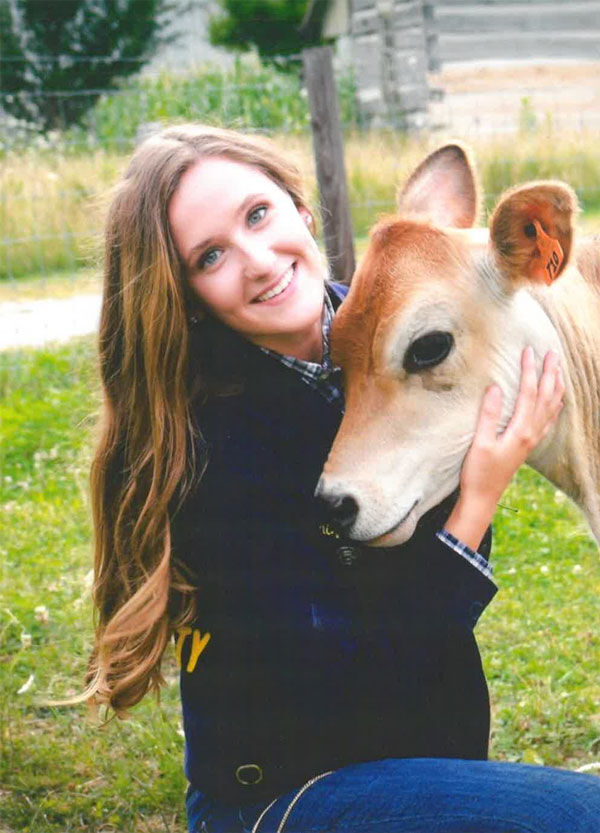 Mady Underwood received her American FFA Degree (the highest degree an FFA member can earn) on Oct. 28 during a ceremony that was held virtually due to the COVID-19 pandemic.

Mady Underwood received her American FFA Degree (the highest degree an FFA member can earn) on Oct. 28 during a ceremony that was held virtually due to the COVID-19 pandemic.

No doubt that 2020 was a year no one anticipated. Through it all, the Millcreek-West Unity FFA Chapter had a very successful year. On Jan. 27, Ian Hoffman competed in the Beginning Prepared Public Speaking CDE at Hilltop High School with his speech on “Basalt: Breaking New Ground.” He finished second in Williams County and moved on to the district competition that took place Feb. 10 at Pettisville High School, where he placed sixth in the district.

From May 4-8, 2020, the chapter had several members participating in the Ohio FFA Celebration. Six of our members submitted applications for Agriscience Fair and represented our chapter well. They included: Chelsea Funk, Ian Hoffman, Ingrid Hoffman, Joscelyn Layman, Joe Reamsnyder and Alora Siegel. Hoffman was recognized for placing second in Division 3 Plant Systems, Layman won first place in Division 1 Plant Systems and Siegel earned first place in Division 1 Power Systems. Layman and Siegel then earned the honor of submitting their applications to the National Agriscience Fair. Millcreek-West Unity FFA members Jozlyn Jones and Kodi Brenner were also recognized for their State Gold Reporters and Treasurers books, respectively. Brenner also was recognized for being one of over 800 FFA members across the state earning their coveted State FFA Degree.

Last year Rimm Kleen Systems in West Unity donated the use of the three acres in front of their company to the FFA. This spring the chapter planted soybeans and maintained them through the summer with the guidance of Wilbur-Ellis. On Oct. 11, Reamsnyder Farms harvested the crop and the plot yielded 44 bushels per acre. The profit from this crop will go toward member dues, the annual banquet and conference and convention fees. Those who helped the chapter in a variety of areas during this project include: Rimm Kleen Systems, Wilbur-Ellis, Rupp Seeds (Kevin Miller, seed dealer), Schaffner Farms (Denny, Kevin and Austin), Sam Shilling, Reamsnyder Farms (Dave, Tyler and Travis).

The 93rd National FFA Convention was celebrated for the first time ever virtually from Oct. 27-29, and all of the FFA members were able to take part in the convention. On Wednesday, Oct. 27, two members competing in Agriscience Fair found out the results of their efforts. Layman placed first nationally in Division 1 Plant Systems with her project on “The Effects of Adding Rhizobium leguminosarum to Zea mays P0075AM”, and Siegel placed second nationally in Division 1 Power, Structural, and Technical Systems with her project on “The Comparison of Tensile Strength on SMAW, GMAW, and GTAW Welded Steel.” Later that same evening, the chapter cheered on Mady Underwood as she received the highest degree an FFA member can earn, the American FFA Degree.

The Ohio FFA Foundation again partnered with Beck’s Hybrids to offer the opportunity for members to apply for the symbolic FFA jacket. First-year members from across Ohio applied to receive the jackets as part of the Blue Jackets program, sponsored by these two organizations. Beck’s Hybrids is committed to helping provide FFA jackets for first-year members. With the generosity shared from community supporters and the Beck’s Hybrids dealer network, 193 FFA jackets were awarded to first-year Ohio FFA members this year. Millcreek-West Unity FFA members Carson Crossgrove and Brooke Moreland were two of those selected to receive their FFA jackets through Beck’s Hybrids program. Their jackets were sponsored by Mr. Rolland Wolfrum of Cardinal Creek Seeds of Hicksville.